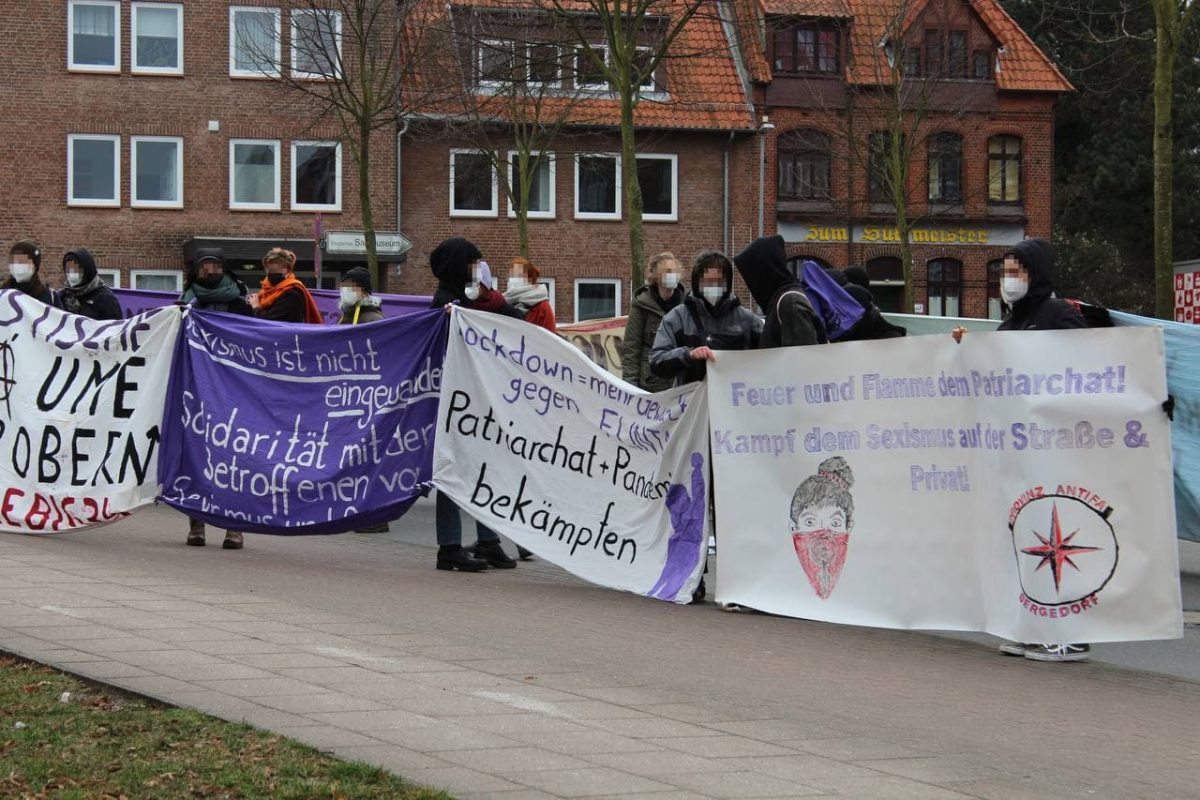 TRIGGERWARNUNG: In this text we write about psychological violence. This can be retraumatising and triggering. Think briefly about whether you want to read this text.

The following was written within a working group on patriarchial violence that was formed within our alliance. The text was read out in german and distributed in english on our demonstration on 7th march. The german text can be found here.

We are the working group on patriarchal violence within the feminist 8th march Alliance Lüneburg. Originally, today we wanted to share some numbers on how much patriarchal violence happened when and where exactly in the last few years. But then we realised that we know these numbers, and you probably do too. We know the violence. Not just because we talk about it all the time. No, because many of us experience it every day.

END_OF_DOCUMENT_TOKEN_TO_BE_REPLACED 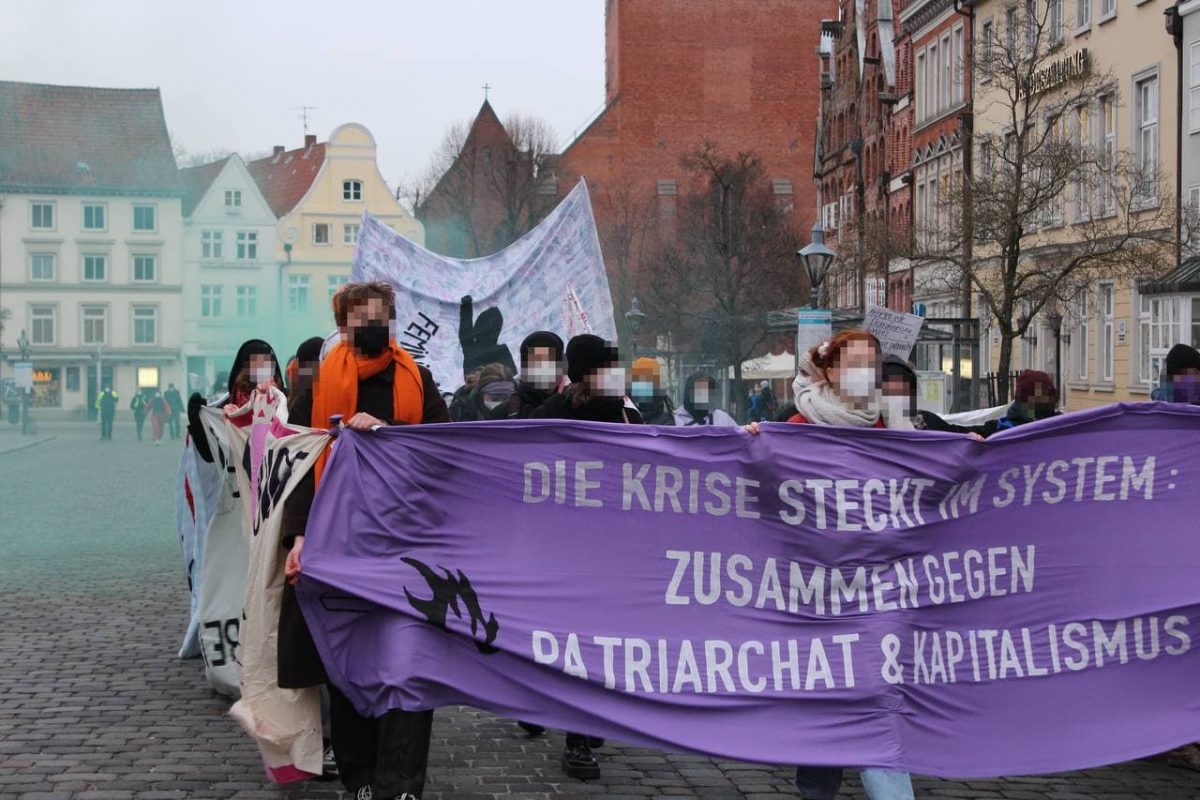 This is the publishing of a speech that a working group on reproduction, labour and capitalism has written and that was held on our demonstration on 7th march, as well as on the demonstration “Shut down! close offices and factory halls – for solving the corona crisis in solidarity” that our comrades from Shut down Lüneburg organised. The text has originally been written in German, you can find the German version here.

Another 8 March, another year gone by. That also means: 1 year of the Corona pandemic, 1 year of more or less tough measures to contain it. We in the feminist alliance have noticed time and again this year that the crisis that accompanies Corona is being played out on our backs.

To begin with: we speak of reproductive labour. We adopt this term from Marxist feminists. It describes activities that sustain our lives and our labour power. These are, for example, cooking food, doing the laundry, but also bringing up children who will later work and caring for the sick so that they are able to work again. With this maintenance and restoration of life and well-being, our social order, capitalism and patriarchy are reproduced – that is, kept running.

The exploitation and burden of FLINTA* intensifies in the crisis!

You all remember how in the spring in the evenings there were applauses for nurses, doctors and other workers in the health sector. And maybe you also remember how little their situation has changed since then. Public health care in Germany has been cut to the bone in recent decades. Not only the many women, lesbians, intersex, non-binary, trans and asexual persons (from now on called: FLINTA*) who work in the health sector notice this. The profit orientation of many hospitals and the privatisation in the health system have led to the fact that we have too few. Too few intensive care beds, too little protective equipment and above all one thing: too few staff. Medical staff who put their own health at risk in the crisis are paid far too poorly and are additionally pushed to the limits by a lack of time and personnel. They experience an enormous double burden due to the worry of infecting themselves, and thus also people in their private environment, because of the lack of protection at work.

Particularly vulnerable in the pandemic are once again racialised and migrant FLINTA*, who often work in informal and precarious employment. Since neoliberalism requires both parents to work, much reproductive work is outsourced. The household, for example, is taken over by domestic helpers, child rearing by carers and grandparents are cared for by nursing help. This work is mainly done by FLINTA* from economically weaker classes or countries. And this work has become more dangerous because of Corona. For example, we saw that one care worker had to go to a different flat every day of the week and was not even given a mask or gloves. The situation of workers is of course even more difficult when they cannot invoke labour laws because they don’t have a residence or working permit.

Especially since the 1970s, reproductive labour has increasingly become wage labour. The state or companies have offered care and catering as services, exploiting mainly FLINTA* in low-paid jobs. For example, in public hospitals, but also in day-care centres or restaurants. Since the Coid-19 pandemic, many public places where we could go for recreation, such as restaurants, swimming pools or sports clubs, have been closed. Education, care talks, cooking, care – This reproductive work now no longer takes place as wage labour, but is shifted back to the home, where it is unpaid and to a very large extent done by FLINTA*.

The conservative crisis policy ignores and discriminates against all forms of relationships that are not the heterosexual nuclear family!

In order for this to work and for FLINTA* to absorb the crisis at home, the model of the nuclear family is rhetorically resorted to. The nuclear family describes the ideal of a mother, father and two children. This nuclear family and heterosexual marriage receive special political protection in Germany. Even in a normal state, they are supposed to absorb crises and insecurities and be a social anchor. And in the pandemic, too, it can be seen, that the measures are designed to precisely enforce this form of relationship. For example, long-distance relationships that were not marriages were not a valid reason to travel for a long time. Or the guideline of having only one contact person per household – love federal government ever heard of WGs or patchwork families?!  Not to mention people who live with three, four or even more people in joint relationships. Joint walks are only legally permitted for couples of two. And why does it have to be romantic partners that have to be the one person we can meet and that must fulfil our social needs. Why can a friendship not be considered equally important and necessary?

The conservative focus on the sole protection of the nuclear family exposes FLINTA* to increased partner and family violence!

The nuclear family simply does not correspond to the reality of life for most people in Germany. And where it does, it is not a safe place for many. Stay-at-home and the closure of public places have also led to a stark increase in domestic and partner violence against FLINTA*. In Germany in 2021, 32 women and 6 children have already been murdered mostly by their partners or ex-partners and 41 others have been injured, some with life-threatening injuries. And this year is just 66 days old.

So protecting the nuclear family cannot be justified on the basis that it is about people’s needs. Rather, the protection of the nuclear family stands for imposing the patriarchal and capitalist order even against the needs and at the expense of the safety of FLINTA*.

The nuclear family and the separation of reproduction and production serve the interests of the state and capital!

Instead of a natural order, the nuclear family is about something that has arisen historically. The separation of production and reproduction is a basis for the development of capitalism. In capitalism, labour power becomes a commodity, something I can and must sell. In the process, it becomes invisible that I do not automatically have this labour power. In order for me to be able to do my workload at the workplace, a lot of effort is necessary, sandwiches that have been greased, clothes that have been ironed, the daily exercises against back pain at the desk. So while some activities become a paid commodity, others become invisible at the same time. And because the wage apparently expresses what my work is worth, cleaning the toilet and washing the dishes at home is apparently worth nothing.

Nevertheless, it is precisely unpaid reproductive labour that is important for capitalism. The feminist slogan “Without us, the world stands still” is more than just a phrase on a banner. For capitalism depends on wage workers to be provided for, so that they can work. And that they reproduce, have children, care for them and educate them so that they can work themselves later. Without reproductive labour, there is no labour power that can be exploited. The state is also equally dependent on the population being healthy, working and reproducing. Where FLINTA* underpaid or unpaid cook dinner, care for relatives, and take on teaching duties in home schooling, the state is relieved.

In the family, FLINTA* are left alone with the reproductive work.  Mothers stand alone in the kitchen in the morning and make sandwiches for the children. Alone, however, we are less able to defend ourselves against exploitation than in a large workforce together with colleagues. There is no trade union network, no representation of interests. Separated from wage labour, made invisible and devalued, reproductive labour can be exploited particularly well by FLINTA* in the family. At home, there is no wage increase and no end to the workday.

The fact that this also works against the interests and needs of FLINTA* is not due to a natural division of tasks. Rather, this patriarchal division of roles has been culturally consolidated under capitalism. The focus on the nuclear family as the smallest social unit was even enshrined in the Grundgesetz. This ideology is called familism. This means that certain roles and tasks are presented as the natural, and only meaningful, order. Even if deviations from this norm are possible, and queer and feminist struggles have been able to win freedoms: The heterosexual nuclear family is still systematically assumed and determines the design of the welfare state.

Even in the Corona pandemic, the nuclear family serves the interests of capital and state!

We are currently seeing that a large part of the disadvantages are being shifted into the private sphere and thus into the realm of reproduction. For example, by limiting our leisure contacts while we must continue working. Or by keeping our children at home and having to look after them, but not getting any time from our employer. And so once again the burden of the pandemic is shifted onto families and into private life. In the Corona pandemic, too, the state and capital are using the devaluation of FLINTA* and their work to continue making profits. It is no coincidence that pharmaceutical companies can make profits from vaccine patents while caregivers have to work without protective equipment.

In this sense: Let us overcome patriarchy and capitalism together. 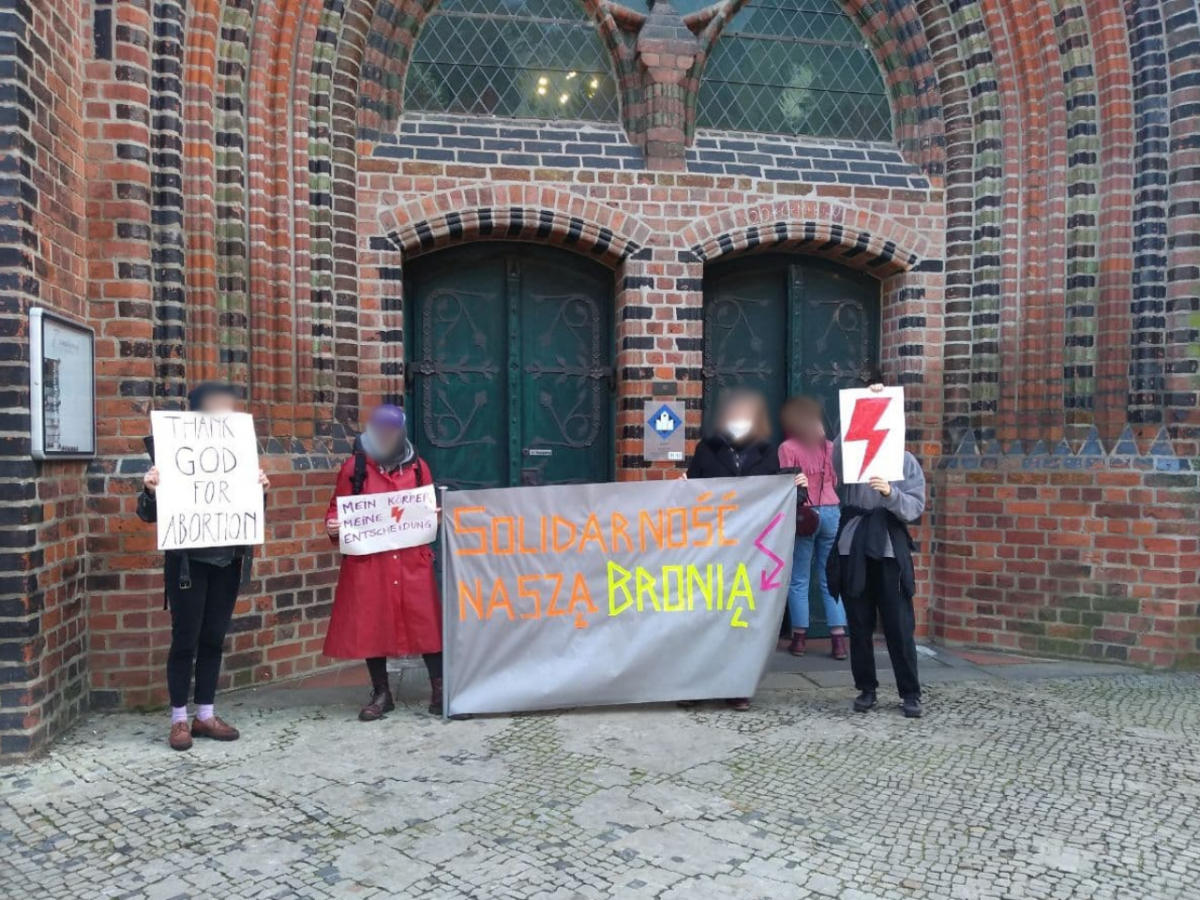